Last week, a Tesla Model S smashed into the back of a firetruck at a high rate of speed on a highway near Culver City, California. The firetruck was stopped for an accident on the highway. The driver of the Tesla reported that he had been using Tesla’s autopilot driver assistance system at the time of the crash and the autopilot system did not apply the vehicle’s brakes. Luckily, no one was injured as a result of the crash. The National Highway Transportation Safety Administration is currently investigating the crash. 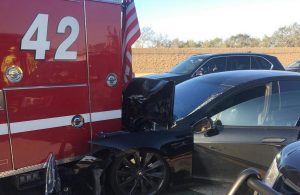 Photograph of the accident, courtesy of @culvercityfirefighters.

In July of 2017, a driver blamed his Tesla’s autopilot system for causing the car to flip and injure five passengers. The driver, David Clark, claimed that he had his Tesla’s autopilot system engaged when the car suddenly accelerated, causing his vehicle to flip. A subsequent investigation of the accident revealed that Mr. Clark was at fault for the accident because he had “disengaged” autopilot by stepping on the accelerator prior to entering a sharp curve in the road.

Last year, a driver of a Tesla was killed after using Tesla’s autopilot driving system. The Tesla was driving on a divided highway when a tractor trailer made a left-hand turn in front of the Tesla. Due to the white siding of the tractor trailer and the “brightly lit sky”, Tesla’s autopilot system did not recognize the vehicle on its radar system and did not apply the brakes. The driver of the Tesla did not apply the brakes either. As a result, the Tesla did not stop in time and t-boned the tractor trailer. In placing blame on the deceased driver, Tesla’s founder and CEO, Elon Musk, stated that Tesla’s radar “tunes out what looks like an overhead road sign to avoid false breaking events.”

Tesla’s autopilot system works by using the vehicle’s eight cameras to bounce a signal around the car. According to Tesla, the cameras provide 360 degrees of visibility, at up to 250 meters of range. Ultrasonic sensors, coupled with the cameras, allow the car to detect both hard and soft objects. This allows the system to “see” ahead of the car in front of the driver and analyze the position of other vehicles on the road and apply braking if necessary. Tesla’s autopilot system will also match the vehicle’s speed to traffic conditions, automatically changes lanes without the driver’s input, exit the highway, and self-park.